THIS ONE’S FOR YOU GUYS.

Nancy and I are outside in our campsite, I’m on “my side” of the camp walking towards my van, and she’s standing near her van. She motions for me to look, there’s a man, slowly walking, coming into our camp.

I’ve seen him twice before, walking right through our campsite between our two vehicles. I stop and stand there watching him, so he knows I’m watching him. When he gets close enough to us I say “what’s up?”

He says something like, that’s the way to do it, have two campsites …commenting on the way Nancy and I have a big camp spread out with our vans across a wide area.

I say, “yes, and you’re walking right though it.”

He says something about that not being ok, and I say awkwardly “It is kind of weird.” Duh. So awkward.

Then he gets defensive.

Not apologetic, or understanding how we might feel frightened by a strange man walking through our campsite unannounced … nope, he’s mad.

He berates me, saying “You know people can park right up 15 feet from your bumper,” (rules in this area) implying I shouldn’t have any boundaries with people just walking through the campsite.

Then he says … “ok, another one,” dismissing me in a very derogatory way. Hmmm. Another one? Must be he’s been called out on this before.

Implying it’s not ok to have boundaries, I’m a just another bitch.

I should have said, “Another one what??? Another woman that has boundaries with you???”

He just took me off guard and I was pretty speechless. What I really wish I would have said is, “My understanding is that it’s proper etiquette to ask permission to enter someone’s campsite.” Period.

This is the third time he’s walked right through our site, and he’s obviously aware Nancy and I are together. The first two times I was in my van and watched him slowly walk through between our two vans, picking up things from the ground.

This time we happened to both be outside.

Ask any woman who’s spent time on the road, and she will have multiple occasions and variations of this scenario she will relate to you. I’ve been on the road two years now, and it’s excruciatingly common. Most of the time I don’t say anything … and THIS IS EXACTLY WHY. So now I’ve ticked someone off within walking distance of our campsite, and it’s a very vulnerable feeling.

Men repeatedly walk into our campsite without permission, ignoring the well-know etiquette to ASK PERMISSION.

You wouldn’t walk right into someones home without knocking would you? Especially if you are a perfect STRANGER to those people? How would THAT play out?

Well, that’s how we feel when men walk right into our camp unannounced without permission. And when we DO ask that it not happen, this is the reaction we risk having to deal with.

And as a couple, Nancy and I have had men repeatedly walk into our campsites without permission. It’s not just solo women that have this problem.

Last year, a man camped near us in Quartzsite, changed his Facebook profile to present as a woman, and got himself into the Women’s Only WRTR Forum on Facebook. (WRTR = Woman’s Rubber Tramp Rendezvous.)

He was caught online. It was disturbing, as he was camped just across the wash from us in Quartzsite. He’d made the mistake of having identifying pictures up of himself, and his very distinctive rig, before he changed his profile pic and ID to a female on Facebook. He didn’t even create a different profile, just changed his current one. Not too smart.

He’d said something in another forum (posting as himself, as a male) about the “Women’s LGBT” group, (confusing that with the WRTR) that had set off red flags with me, and I’d looked at his profile and taken a screenshot. Within an hour he’d changed his profile to female, and when I showed my partner Nancy, she recognized him and his rig and said he’s camped near us! The timing was uncanny. Moderators were contacted and he was booted from the Facebook group. But still, he remained camped near us. So you just never know.

So yep, I’m going to question if I see something that might be a boundary being violated. I recently saw a man posting on the Women’s Only Forum on the CheapRVLiving website, and I questioned it. Turns out it was innocent, there are ways to look at posts that don’t make it clear it’s the Women’s Only Forum, which I didn’t realize. It sure did set a few people off, but not with the poster. They were ticked with me.

I don’t want to hurt anyones feelings. In fact I just had a fantastic in person conversation with a another man about nomadism, single men and women, and what did I think was going on with all these single people on the road. He was genuinely curious about why so many relationships were breaking up, including his, but he was very respectful and not pushy. He struck up a conversation with me at the dumpsters, but not until I gave him a friendly hello and how are you.

GUYS, we are VULNERABLE. As full-timers we are living outside, with very little privacy, and for obvious reasons, we have to be alert and careful. PLEASE, be aware of our feeling of vulnerability when you approach us, and understand WE ARE GOING TO BE ON THE DEFENSIVE if you’re entering our “home” without asking permission!

Nomadic Freedom: Is It Really A Thing?

Sharing the ups and downs of real van life with a sprinkling of cosmic s**t.

Cosmic Nomad Voyager
This little girl is an orb-weaver spider. She perches on my car antenna during the day and spins her web at night. She even made it through a downpour! #spidertotem #crittersontheroad #wildwomenontheroad

WILD WOMEN ON THE ROAD: A WOMEN’S GUIDE TO NOMADIC FREEDOM IN THE MODERN AGE 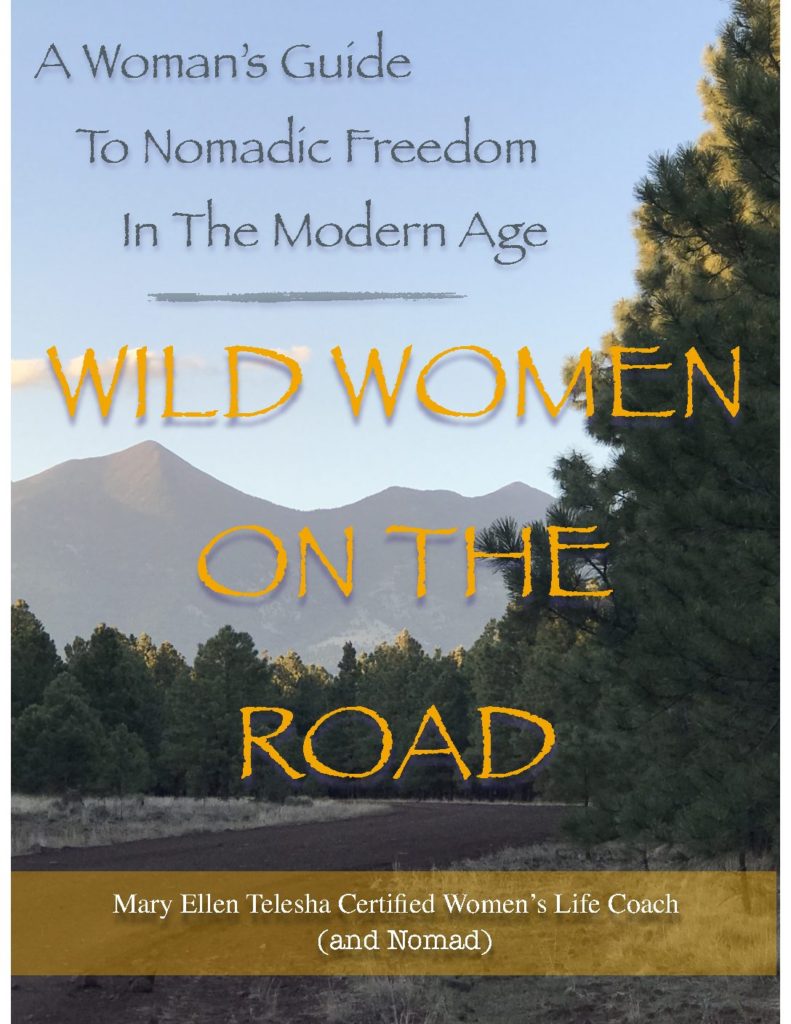 TOP TEN TIPS FOR NOMADS: THE (MOSTLY) LIGHTER SIDE OF NOMADIC LIFE 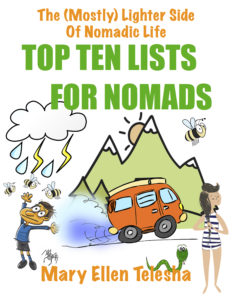 Homes On Wheels Alliance, Inc. (HOWA), is a charitable 501(c)3 nonprofit organization, that assists individuals with achieving sustainable personal and economic self-sufficiency by focusing on providing safe and secure unconventional housing, and an economic safety net through a mobile lifestyle, to help get those in need back on their feet. Read more here.

Learn More About The Nomadic Lifestyle

Bob Well’s website, CheapRVLiving, is one of the best places on the web to start learning about the nomadic lifestyle!